Our September 2013 expedition to Axial Seamount was a great success! We managed to complete all our major goals with the skilled support of the R/V Thompson’s crew, the ROV Jason team, and our hard-working group of scientists. We also had unusually good weather for this part of the world, which always makes everything easier at sea. This research cruise had three main projects.


One project was to collect fluid and microbial samples from Axial’s hydrothermal vents to better understand the microbial ecosystems that form the base of the food chain at seafloor hot springs. We collected samples of hydrothermal vent fluid to track changes in chemistry since Axial’s 2011 eruption and how those changes may effect the microbial communities that live in the warm chemical-rich waters below the seafloor. We used a range of sophisticated samplers to collect vent fluids, gases, microbial mat, and hydrothermal sediments. We also collected the microbes living in the vent fluids for culturing experiments on board the ship and genetic analysis back on shore.


The second project was a geothermal energy experiment that deployed prototype instruments on the seafloor to assess the feasibility of converting thermal energy from hydrothermal vents to electrical energy that could be used to power deep-sea sensors or perhaps underwater vehicles in the future. Geothermal energy devices were successfully placed on three separate hydrothermal vents at Axial. They will stay deployed for the next year and continue to collect data until they are recovered next summer. The results from this experiment will guide the design of more advanced energy conversion devices in the future.


The third project was making seafloor pressure measurements to monitor how much the volcano has reinflated since its last eruption in 2011. This was accomplished during a long Jason dive (almost 5 days) that repeatedly visited 10 different measurement sites, traversing a total of 65 km. These measurements found that the center of Axial’s caldera has risen by 1.2 meters (4 feet) in the last 2 years, the highest rate of uplift we’ve seen since we started these measurements over a decade ago! This means the volcano has already recovered over half of the deflation that occurred during the April 2011 eruption, and suggests that Axial may be closer to its next eruption than we expected. We will need continued monitoring to anticipate Axial’s next move, but these results are exciting and add urgency to the efforts to complete the installation of the cabled observatory at Axial as soon as possible.


We are grateful to the funding agencies that supported our research: NOAA’s Pacific Marine Environmental Lab, The Gordon and Betty Moore Foundation, The Office of Naval Research, and The National Science Foundation. We also greatly appreciate the support from the University of Washington (who operates Thompson), the Woods Hole Oceanographic Institution (who operates Jason), and the National Deep Submergence Facility (which manages Jason).

And thanks to you for following along during our research cruise and for all the great questions that we received. We had some fun interactions with students and teachers in science classrooms during the cruise via our satellite-based internet connection. I hope you will be able to join us again on a future expedition to Axial Seamount. I’m already looking forward what we will discover then!

Cruise Report:
The cruise report is available as a pdf at:
Report with all dive logs (13MB) or Report without dive logs (5.7MB)

Highlights from the expedition:
(click image for full-size version) 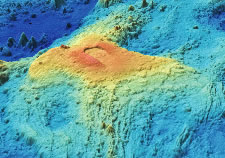